The Negro Movement and Muhammad Ali

By Dawal Yah'El in Muhammad Ali
No comments

The Negro Movement and Muhammad Ali

This video showcases the wisdom, knowledge, and speaking quality of the great black radical Muhammad Ali. Being interviewed by William Buckley on a show called firing line, they talked about the black or negro movement in America.

One thing that is great is that Ali didn’t focus on the black movement but on the equal justice and freedom movement for all peoples.

Ali talked about the white race method of divide and conquer in this interview. He also talked about following Elijah Muhammad and Malcolm X’s demise and fall from the “Black Muslim” organization.

Muhammad Ali and the Negro Movement

William Buckley made a great point that not all white people are not the problem, but that there are groups of people who lead racist movements. It is a great interview that people should enjoy. 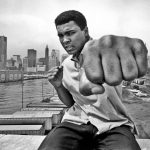