By Chief Radical in
No comments

Cheikh Anta Diop born on December 29th of 1923, was a historian, anthropologist, physicist, and politician who studied the human race’s origins and pre-colonial African culture. In 1946, at the ripe age of 23, Diop decided to go to Paris to study. He originally thought to study mathematics as his major of study.

According to Diop’s personal writings, his body of education in Paris included studies in History, Egyptology, Physics, Linguistics, Anthropology, Economics, and Sociology. He was very well-rounded and educated individual. Not only an educator, Diop had been politically active.

He was involved in the Rassemblement Démocratique Africain (RDA), which is an African nationalist organization that was led by Félix Houphouët-Boigny. Dr. Diop was the general secretary of the RDA students in Paris from 1950 to 1953. Under Diop’s leadership, the first post-war pan-African student congress was organized in 1951.

Diop’s understanding and main theory of Africa were that the political strife for African liberation would not be successful without the civilizing role of the African being acknowledged. This he believed began with ancient Egypt. He singled out the contradiction of “the African historian who evades the problem of Egypt“.

Black Africa: the economic and cultural basis for a federated state is one of Cheikh’s books and is the on that best expresses Diop’s political aims and objectives. In Black Africa, Diop argues that only a united and federated African state will be able to overcome the crying issue in Africa, which is its underdevelopment conflict. He proposed to establish a single African language, which should be used across the continent for official, educational, and cultural purposes. 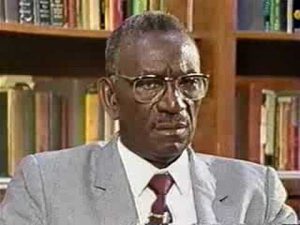 His initial doctoral dissertation submitted at the University of Paris, Sorbonne in 1951, was based on the premise that ancient Egypt, with all the glory of the past pharaohs, was an African civilization.

This dissertation was rejected by “white” Eurocentric educators. Regardless of this, Diop’s dissertation was finally published by Presence Africaine; and it was under the title Nations Negres et Culture in 1955 (which won him global recognition).

Diop pushed to have his doctorates granted again, and two additional attempts were turned back once again. It wasn’t until 1960 when he entered his defense session with an array of sociologists, anthropologists, and historians; that he triumphantly carried his argument.

It took nearly a decade of enormous and arduous effort, but Diop finally won his Docteur es Lettres! In that same year, 1960, were published two of his other works; the Cultural Unity of Black Africa and Precolonial Black Africa.

In 1966 at Dakar, the World Festival of Negro Arts honored Diop.

He was honored as “the black intellectual who has exercised the most fruitful influence in the twentieth century.”

Diop passed in 1986 on February 7th. He is remembered as a towering Sudanese black radical, educator.

*links in this article that lead to Amazon are affiliate links with cookies that expire in 24 hours. These affiliate links, if acted upon, contribute to the work being published on this website for the edification of you and others who enjoy and utilize the contribution. We love revisiting what the black pioneers have done, and continue to do!