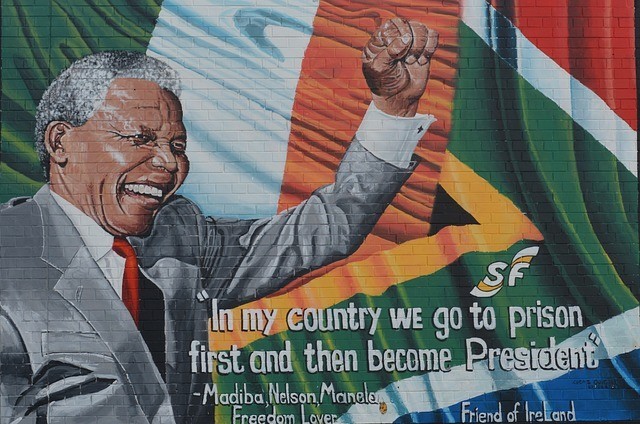 Many people know or have heard of the late great Nelson Mandela, as a president, but more as the South African leader. Nelson was born in a village in South Africa called Mvezo, which is in Umtata. This was part of South Africa’s Cape Province.

His middle name is Rolihlahla, which actually means “troublemaker.” Not Mandela, a troublemaker? He made a lot of trouble for racist whites in South Africa, and perhaps some for himself. Nelson will forever be known as the South African political activist, which steered him into the positions he held in his later life.

This black radical spent over 25 years of his life in prison because he opposed the apartheid regime. He was freed from prison in 1990, and four short years later, he was being sworn in as South Africa’s first president. For obvious reasons, this was a big deal.

The MLK Jr. of South Africa

Many men and women have been presidents of countries, but not many presidents have won Nobel Peace Prizes. President Mandela was one of them to win the Nobel Prize, in 1993. He won for his efforts to end racial segregation in South Africa. You can view him as the Martin Luther King Jr. of South Africa.

This kind of goes to show, if the FBI in America did not put out an assassin on Dr. King, Dr. King could have been the first black US president perhaps (we digress). Back to Mandela; before being imprisoned wrongfully, Mandela professionally was an attorney.

He knew the law. And because of racial inequalities, he was in high demand to help stop the apartheid. He was up for the battle because he was committed to the cause. He and other members of the ANC (African National Congress) were arrested for treason.

Acquitted, Mandela reformed and retooled, only to be rearrested and this time put in jail. Imprisonment was a learning period, and it made Nelson stronger and also well known throughout the world. Although the struggle appeared to be him fighting against white people, Mandela spoke differently. He felt he was fighting against the apartheid system.

When Nelson was released from prison on February 11th of 1990, the country took it as the end of the apartheid. When he assumed power in South Africa as the first president of the democratic state, he wasn’t a vengeful leader. Instead, the late great Mandela was extremely forgiving and generous.

He supported even white groups, encouraging all people to support the Springboks, a group symbolized as white supremacy. That would equate, in the United States, to Dr. Martin Luther King Jr. advocating for black US citizens to support the KKK (Ku Klux Klan).

Mandela both a peace and black radical…

This was known as the epitome of peace and forgiveness. It catapulted his status as one of the world’s greatest leaders. He did it his way, supporting so-called villains like Colonel Gaddafi, President Fidel Castro, and President Yasser Arafat. Certainly a radical, and we salute the late great Nelson Mandela, as president, as a political activist, as a social activist, and peace radical. Nelson Mandela, black radical.

Take the time to read about this great man, in his autobiography, Long Walk to Freedom!*

*links in this article that lead to Amazon are affiliate links with cookies that expire in 24 hours. These affiliate links, if acted upon, contribute to the work being published on this website for the edification of you and others who enjoy and utilize the contribution. We love revisiting what the black pioneers have done, and continue to do!